On our way to Mahabalipuram a week ago (see the previous post) we stopped at a more recent but equally fascinating site: the Madras Crocodile Bank Trust and Center for Herpetology, established in 1976 by Romulus Whitaker. Its initial aim was to aid in rehabilitating the diminishing numbers of muggers (also known as “marsh” crocodiles in the wild). Now it is home to representatives from eighteen of the twenty-three species of crocodiles and alligators worldwide. 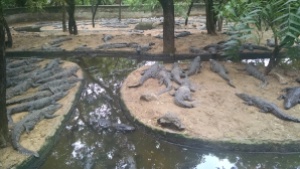 The front holding area (pictured above) alone contains 365 muggers. They are now regarded as vulnerable but not endangered. These particular specimens can never be released into the wild; those destined for release are raised in the back six acres, which are closed to visitors.

The term “mugger” comes from the Sanskrit Makara, the mythical crocodile on which Varuna, the god of the seas, rides (according to Janaki Lenin; see below).

We were particularly fascinated by this gharial. That bump on the male gharial’s nose is a “resonance chamber.” According to our guide, it makes a sound like a mixer that attracts females. The bigger the bump, or ghara (literally “spot”), the more females the croc can attract. A twenty-foot gharial at the park has a ghara the size of a coconut and an entourage of twenty females. 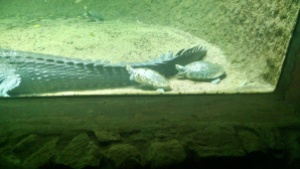 Gharials principally eat fish and have sensor patches on their skin that can detect ripples created by fish swimming by. This fellow has eaten recently, so these little fish are free to feed safely on the algae on his back (they also love feasting on the crocs’ poop!).

Our guide and the map below clarified a frequent point of confusion: alligators are only found in the U.S. and in one location in China. 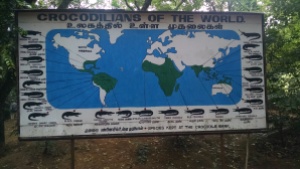 The highlight of the visit was watching members of the Irula Snake Catchers Industrial Cooperative Society “milk” snakes for their venom. All those clay pots housed a total of 1,624 snakes, representing the Big Four (the most venomous snakes in India). 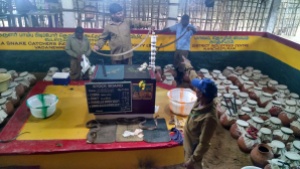 The Irula tribes, snake trackers by tradition, used to catch snakes and sell their skins. Now they catch and milk snakes for research and anti-venom. The snakes are kept for one month, during which they are milked four times, and then released into the wild. The cooperative provide 95% of India’s venom used for anti-venom.

My Husband and Other Animals, by Janaki Lenin, wife of Rom Whitaker, founder of the Madras Crocodile Bank Trust. It’s an engaging collection of informative as well as entertaining articles about life with a herpetologist and wildlife conservationist … like the time the house got invaded by tree frogs … or an army of ants.

Rom Whitaker either has a penchant for marrying writers or a lifestyle that begets stories–or both. This collection of beguiling essays features color illustrations, suitable for both juvenile and adult readers, written by Rom’s first wife.